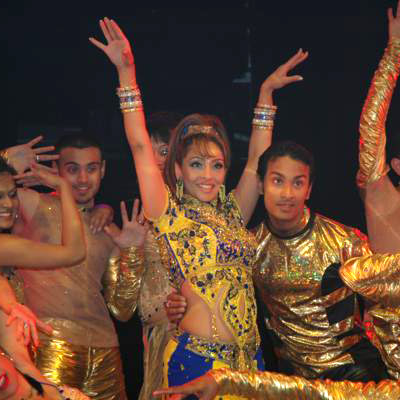 Bhangra is a lively form of music and dance that originated in the Punjab region in Southeast Asia. As many Bhangra lyrics reflect the long and often tumultuous history of the Punjab, knowledge of Punjabi history offers important insights into the meaning of the music. While Bhangra began as a part of harvest festival celebrations, it eventually became a part of such diverse occasions as weddings and New Year celebrations. Moreover, during the last thirty years, Bhangra has enjoyed a surge in popularity worldwide, both in traditional form and as a fusion with genres such as hip -hop, house, and reggae. As Bhangra continues to move into mainstream culture, an understanding of its history and tradition helps to appreciate it.

Although Bhangra has possibly existed since as long ago as 300 BC, over the past forty years it has experienced new highs in popularity and innovation. The term "Bhangra" has gradually evolved and now refers to many different sub-classes of dance and music for many occasions.The Origin of Bhangra While Bhangra historians speculate the dance may have originated in the time of the wars with Alexander no one is sure it existed until about five hundred years ago. Around the 14th or 15th Century, Punjabi wheat farmers danced and sang songs about village life to help pass the time while working in the fields. With time, these became part of harvest celebrations at Bhaisakhi (April 13) festivals, as the sight of their crops growing invigorated the farmers. From here the dance quickly moved through all divisions of class and education, eventually becoming a part of weddings, New Year parties, and other important occasions.

The Many Sub-Dances of Bhangra:

Bhangra has developed as a combination of dances from different parts of the Punjab region. The term "Bhangra" now refers to several kinds of dances and arts, including Jhumar, Luddi, Giddha, Julli, Daankara, Dhamal, Saami, Kikli, and Gatka.Jhumar, originally from Sandalbar, Punjab, comprises an important part of Punjab folk heritage. It is a graceful dance, based on a specific Jhumar rhythm. Dancers circle around a drum player while singing a soft chorus. A person performing the Luddi dance places one hand behind his head and the other in front of his face, while swaying his head and arms. He typically wears a plain loose shirt and sways in a snake-like manner. Like a Jhumar dancer, the Luddi dancer moves around a dhol player.Women have a different but equally exuberant dance called Giddha. The dancers enact verses called bolis, representing a wide variety of subjects - everything from arguments with a sister-in-law to political affairs. The rhythm of the dance depends not only the drums, but also on the handclaps of the dancers. Julli is a dance associated with Muslim holy men called pirs and is generally performed in their hermitages. Typically the dancers dress all in black, and perform Julli in a sitting posture, but it is sometimes also done around the grave of a preceptor. Julli is unique in that one person, alone, can perform the dance if he so desires. Daankara is a dance of celebration, typically performed at weddings. Two men, each holding colorful staves, dance around each other in a circle while tapping their sticks together in rhythm with the drums.Dancers also form a circle while performing Dhamal. They also hold their arms high, shake their shoulders and heads, and yell and scream. Dhamal is a true folk-dance, representing the heart of Bhangra. Women of the Sandalbar region traditionally are known for the Saami. The dancers dress in brightly colored kurtas and full flowing skirts called lehengas.Like Daankara, Kikli features pairs of dancers, this time women. The dancers cross their arms, hold each other`s hands, and whirl around singing folk songs. Occasionally four

girls join hands to perform this dance.Gatka is a Sikh martial art in which people use swords, sticks, or daggers. Historians believe that the sixth Sikh guru started the art of gatka after the martyrdom of fifth guru Guru Arjan Dev. Wherever there is a large Khalsa Sikh population, there will be Gatka participants, often including small children and adults. These participants usually perform Gatka on special Punjabi holidays.In addition to these different dances, a Bhangra performance typically contains many energetic stunts. The most popular stunt is called the moor, or peacock, in which a dancer sits on someone`s shoulders, while another person hangs from his torso by his legs. Two-person towers, pyramids, and various spinning stunts are also popular. Bhangra Costumes: Traditionally, men wear a lungi while doing Bhangra. A lungi is a colorful piece of cloth wrapped around the waist. Men also wear a kurta, which is a long Punjabi-style shirt. In addition, men wear Bhugaris - also known as turbins - to cover their heads.Women wear the traditional Punjabi dress, salvar kameez. A salvar kameez is composed of a long colorful shirt and baggy, vibrant pants. Women also wear duppattas, colorful pieces of cloth wrapped around the neck. Many Bhangra songs make references to the duppatta. The Many Sub-Dances of Bhangra:

Many different Punjabi instruments contribute to the sound of Bhangra. Although the most important instrument is the dhol drum, Bhangra also features a variety of string and other drum instruments. The primary and most important instrument that defines Bhangra is the dhol. The dhol is a large, high-bass drum, played by beating it with two sticks. The width of a dhol skin is about fifteen inches in general, and the dhol player holds his instrument with a strap around his neck.The string instruments include the tumbi, sarangi, sapera, supp, and chimta. The dhad, dafli, dholki, and damru are the other drums. The tumbi, famously mastered by Amar Singh Chamkila, a famous Punjabi singer, is a high-tone, single-string instrument. Although it has only one string, mastering the tumbi takes many years. The sarangi is a multi-stringed instrument, somewhat similar to the violin. The sapera produces a beautiful, high-pitched stringy beat, while the supp and chimta add extra, light sound to Bhangra music. Finally, the dhad, dafli, dholki, and damru are instruments that produce more drum beats, but with much less bass than the dhol drum.

Bhangra lyrics, always sung in the Punjabi language, generally cover social issues such as love, relationships, alcohol, dancing, and marriage. Additionally, there are countless Bhangra songs devoted to Punjabi pride themes and Punjabi heroes. The lyrics are tributes to the rich cultural traditions of the Punjabis. In particular, many Bhangra tracks have been written about Udham Singh and Bhagat Singh. Less serious topics include beautiful adies with their colorful duppattas, and dancing and drinking in the fields of the Punjab. Bhangra singers do not sing in the same tone of voice as their Southeast Asian counterparts. Rather, they employ a high, energetic tone of voice. Singing fiercely, and with great pride, they typically add nonsensical, random noises to their singing. Likewise, often people dancing to Bhangra will yell phrases such as "Hey hey hey,"Balle balle," or"Hey aripa" to the music.

A variety of plans are available and start at just $9.00.