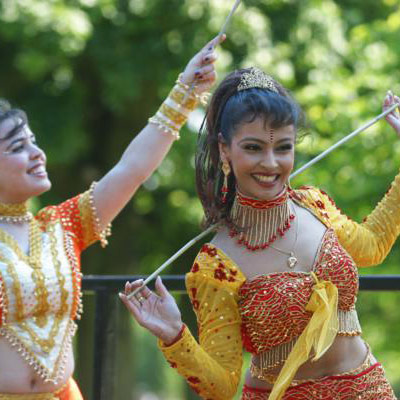 The term ‘Bollywood’ comes from the combination of the names of Bombay (now known as Mumbai) and Hollywood. The Bollywood film industry, based in Mumbai, is the largest film industry in the world in terms of ticket sales and the amount of films made per year.

While the acting and sound tracks that accompany these movies are fantastic in themselves, Bollywood is often known in the western culture for its awe inspiring dance sequences, often featuring large numbers of dancers in perfect co-ordination and ornate costumes.

The term ‘Bollywood’ in dance covers almost any style of dance featured in these extravagant musical movies. Some of the numerous styles of dance featured in films, either in fusion form or in pure forms, include Kathak, Bharatnatyam, Odissi, Garba & Bhangra as well as Belly-dance, Latin, Hip hop, Contempory and Jazz just to name a few! Bollywood dance itself is a style which encompasses all of these styles and more, as well as having its own unique flavour and merit.

Bollywood dance is now so popular in western culture that Bollywood dance classes are offered in most major cities around the globe. Superstars such as Shakira, Madonna and Britney Spears have been so inspired that they have added Bollywood costumes and moves to their stage shows and video clips. Bollywood dance has also gained recognition in the world of western dance and is now featured on shows such as ‘got talent’, ‘so you think you can dance’ and ‘dancing with the stars.

It is not unusual to see Western pop and pure classical dance numbers side by side in a Bollywood film. The international appeal of Bollywood dancing is something that has been in the making for many decades. Originally it was found only in places that had a significant consumption of Indian films. But today it is rising in popularity in the US, Canada and Europe. With the success of films such as the Oscar winning movie “Slumdog Millionaire”, Bollywood films and dance have taken the world by storm & has now come into the global spotlight. Much of this is due to the ever expanding Indian diaspora, but a significant proportion also comes from non-Indians who are fascinated by the exotic, larger than life qualities inherent in it. Be it their lavish sets, production value, or extravagant costumes, stars like Madonna, Shakira & Britney Spears have incorporated the Bollywood style of dance or music into their songs, videos and stage shows.

A variety of plans are available and start at just $5.00.